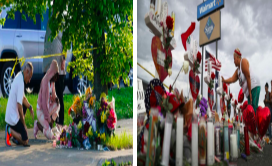 The shooting in Buffalo, New York left 10 dead, and three wounded. The lives of the victims were honored by their loving family members as they navigate this horrific time. The photo to the right captures citizens mourning the loss of the 23 people who died at the Walmart shooting in El Paso, Texas. Photo courtesy of The Guardian and ABC News.

On May 14, 2022, a white man shot 13 people in a racially motivated shooting at Tops Friendly Markets store located in a predominantly black neighborhood in Buffalo, New York.

The shooter, who killed 10 people,  was identified as 18-year-old Payton Gendron.

As the massacre is being investigated for a federal hate crime, the police are reading through a 180-page racist manifesto written by Gendron.

The document was published online prior to the shooting foreshadowing his intent to target Buffalo’s black population.

He describes his belief of being subject to the “replacement theory” where he feels white people are being intentionally replaced with immigrants and minorities.

He later confirms that he is a believer in anti-semitism, fascism, and white supremacy.

He also writes that planning the attack in Buffalo was because it was the most accessible area to him with the highest number of African-Americans.

This shooting seems very familiar to what happened on August 3, 2019, a day forever remembered in the hearts of El Pasoans.

A then 21-year-old white man, known as Patrick Crusius, traveled over eleven hours to kill 23 innocent Hispanics at a Walmart store.

Crusius wrote a 2,300-word manifesto titled “The Inconvenient Truth” where he shares his motivation for the shooting and many racist ideologies.

Gendron and Crusius praise fellow racist shooters from South Carolina, New Zealand, and Pittsburgh, who set a precedent for the recent racist attacks.

He thought that immigrants should not be let into the country or be able to work.

Terrorist attacks like these are becoming normalized, especially those targeting minorities.

Gendron arrived in Buffalo on Friday after driving over 200 miles from his hometown of Conklin.

The police also uncovered his 672-page plans written over 5 months ago to kill black people and referred to them as “replacers”.

He visited the market before the mass shooting in early March to observe the security and location.

He wore tactical gear and used a rifle gun as his weapon, with two other weapons in his car for future attacks in nearby areas.

The police were able to apprehend the gunman and he pleaded not guilty to a first-degree murder charge in court.

He is currently in custody under suicide watch and with no bail, and his next court hearing will be on May 19.

He live-streamed the shooting on Twitch and the video was deleted within two minutes, along with being removed from the platform.

Twitch has expressed its sadness for the violation of its company’s code of ethics and continues its efforts to stop the spread of the video.

This incident is not the first time that Gendron has been investigated by the police.

He was taken into custody and briefly sent to a mental health facility after receiving a mental health evaluation for making an alarming threat at his high school in June 2021.

Biden responded to the shooting by delivering a speech condemning white supremacy and remembering the lives of the ten victims.

Biden said, “In America, evil will not win, I promise you. Hate will not prevail. White supremacy will not have the last word. The evil did come to Buffalo and it’s come to all too many places, manifested in gunmen who massacred innocent people in the name of hateful and perverse ideology, rooted in fear and racism. It’s taken so much.”

Among the ten victims was the market security guard and retired police officer who tried to save lives by firing back at Gendron.

Buffalo Police Commissioner, Joseph Gramaglia said, “He’s a true hero, and we don’t know what he prevented. There could have been more victims if not for his actions…and he went down fighting.”

Nineteen states currently follow the red flag law, which gives a family member or the police the right to petition the ownership of a person’s gun, who is using it in a dangerous way.

In most cases, this law has been very effective and has kept guns out of the wrong hands.

This law is practiced in New York but flew right over their heads in Gendron’s case.

He had already made a threat at school and was looked at by health professionals, but wasn’t at legal risk to purchase a gun as soon as he turned 18.

State officials speculate it was because he passed his health evaluation.

On May 18, 2022, she signed an executive order that allows police to issue a court order against irresponsible gun owners.

There are currently multiple petitions circulating to shed light on the gun violence problem in America and establish stricter laws in all 50 states.

America is constantly mourning the losses of its loved ones at the hands of uneducated racist terrorists.

The lives lost almost three years ago in the El Paso shooting and the ones who were recently killed in the Buffalo shooting will always be remembered.