Dream for the future 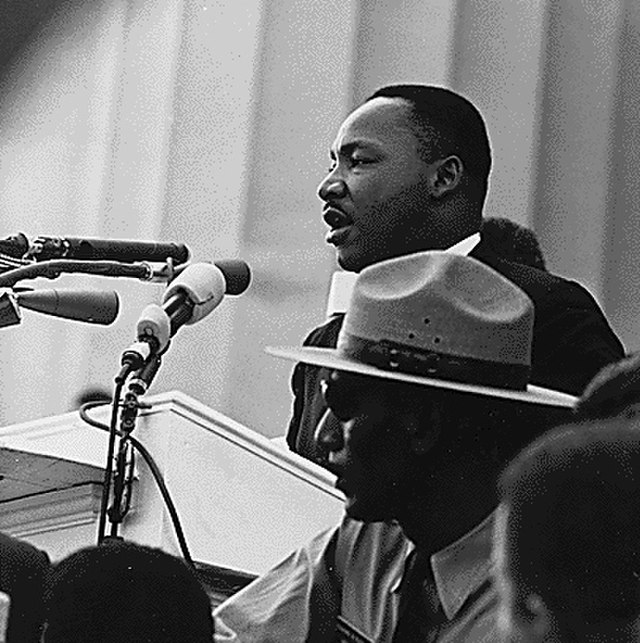 Martin Luther King Jr. speaks on the importance of civil rights at a march. King inspired a movement to end segregation and racial injustice amid division. Photo courtesy of Wikimedia Commons.

In 1963, Martin Luther King, Jr., had a dream to end racial segregation and live in a union where people could be judged by the content of their character and not the color of their skin, fast forward six decades when racism is at an all-time high.

King is undeniably one of the most impactful civil rights leaders of all time, with his “I Have a Dream” speech still being used as an example to empower students in the 21st century.

Even during a march that held over 200,000 people, he emulated Gandi’s style of peace, which helped him connect to a large audience.

He devoted his life to fighting for the rights and injustices of the oppressed by nonviolently disobeying the civil law to prove a point.

His efforts to end the bus segregation system began when he became a prominent leader in the Montgomery Bus Boycott.

King gave a voice to the voiceless at a time when it was needed most.

In 1964, he became the youngest man to receive the Nobel Peace Prize based on his ability to speak for African-American rights.

Ronald Reagan signed a bill in 1983 establishing the third Monday of every January as a federal holiday to commemorate the sacrifices King made for the civil rights movement.

Students around the world are called to reflect on racial injustice and bias that still overtakes the world and the importance of eliminating discrimination to shape a “color-blind” society.

His legacy lives on as society learns about the civil rights movement, and society pushes for equality and recognizes the accomplishments of African-Americans.

As time goes on, King’s dream is fulfilled in small ways beginning with Maya Angelou serving as the first black woman to be the face of a quarter.

Earlier in the year, the United States Mint instituted the American Women Quarters Program, which is a program that chooses five women from different career backgrounds to be the face of a quarter, that will be released over the next four years.

Upcoming women who will be featured in the program are Wilma Mankiller, Anna May Wong, Nina Otero-Warren, and Sally Ride.

From marches to protests to rallies, King was a prominent figure in paving the way for gender equality.

He inspired generations of activists to bring forth their issues in hopes of creating an equal society with his work in the civil rights movement.

King wanted equality to stretch beyond his lifetime, which is progressing through the women’s rights movement.

The new initiative gives hope to the work of Martin Luther King Jr. and the slow recognition women are receiving.

Black History Month is a time to reflect on the stories of Black history and celebrate prominent figures who faced struggles to own their heritage.

One of the most worthy moments in Black history was the election of President Barack Obama, who served as the nation’s first African-American president.

His influence and power in the government gave kids a role model to aspire to, who faced similar challenges as they will in the future.

As Black History Month kicks off, President Biden expressed his commitment to serving racial justice in his moving proclamation.

Even though racism is not completely dissolved, the efforts that past leaders have made in the right direction are appreciated to lead the long.