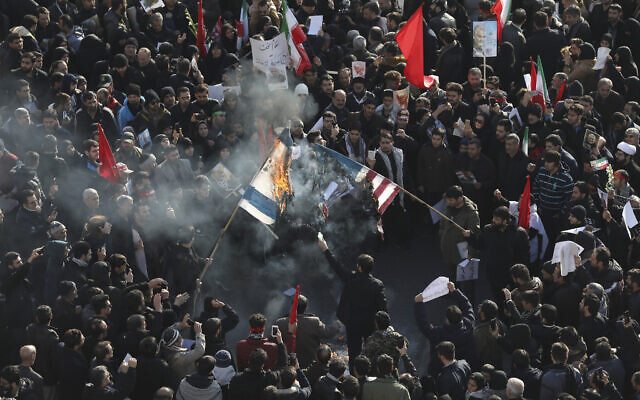 During the funeral for General Qasem Soleimani in the capital of Israel, mourners burned American flags and chanted “Death to America.” Soleimani’s assassination on January 3 caused a breakdown in relations between America and Israel. Photo courtesy of The Times of Israel.

Celebrations for the New Year and the new decade had barely come to an end when Americans checked social media and paled at hashtags declaring the advent of World War III.

The hashtags, the mixed result of hysteria and humor, came as a reaction to the killing of General Qasem Soleimani, one of Iran’s most powerful military commanders and an Iranian national hero, on January 3, according to the BBC.

Soleimani’s death near Baghdad International Airport in Iraq was the result of an airstrike ordered by President Donald Trump.

According to Reuters, Trump said to reporters later that day, “Soleimani was plotting imminent and sinister attacks on American diplomats and military personnel, but we caught him in the act and terminated him.”

In defense of the airstrike, the Department of Defense released a statement that said the following:

“At the direction of the President, the U.S. military has taken decisive defensive action to protect U.S. personnel abroad by killing Qasem Soleimani, the head of the Islamic Revolutionary Guard Corps-Quds Force, a U.S.-designated Foreign Terrorist Organization.”

Following Soleimani’s assassination was outrage on both sides of the conflict — outrage from Iranian and American people alike.

On January 6, mourners in the Iranian capital of Tehran chanted “death to America and Israel” and burned American and Israeli flags during Soleimani’s funeral ceremony, according to The Times of Israel.

On the United States side of the affair, American citizens and government officials alike have sharply criticized the president’s actions.

Officials, such as the Republican senator of Utah, Mike Lee, say Trump’s hasty actions undermined the separation of powers in the American government because he did not seek approval from Congress before authorizing the air strike, according to The Washington Post.

Others, such as NBC News, have even claimed that the sudden attack on Iran was meant to draw media attention away from Trump’s impeachment trial in the Senate on the grounds of abusing power and obstructing Congress.

According to Business Insider, some of Trump’s tweets from 2011 and 2012 have resurfaced, in which Trump claimed that Barack Obama would most likely try to start a war with Iran in order to secure his reelection — a situation that now mirrors his own in quite an incriminating way.

On January 8, five days after Soleimani’s death, Iran retaliated by firing ballistic missiles at two military bases in Iraq where U.S. troops were known to be housed — no Iraqi or American casualties were reported from the attack.

In response, Trump imposed further sanctions on Iran, despite claiming that he would respond to any further retaliation by Iran by targeting 52 Iranian cultural sites for destruction, according to NBC News.

Trump’s threat to target Iranian cultural sites was also not well-received by either side; the former deputy assistant to Obama, Colin Kahl, and Iranian Foreign Minister Mohammad Zarif have both published tweets labeling such an action as a war crime.

It was also later revealed that on January 8, Iran had mistakenly shot down a Ukrainian jet with 176 passengers hours after the attack on military bases in Iraq.

According to CNN, the jet had been misclassified as a cruise missile, and an Iranian air defense operator made a split-second decision to shoot it down.

Overall, the long-time simmering tension between the United States and Iran has finally erupted into a strained military conflict that has left the citizens of each country frustrated with their respective governments.

War is a terrible thing, and war waged as a distraction or as a tactic for personal political gain is even worse.

As Americans, let us hope for a peaceful deescalation to this conflict.